Coronavirus: What’s happening in Canada and around the world on Friday | CBC News

U.S. President Joe Biden’s drive to enact a $1.9-trillion coronavirus aid bill gained momentum on Friday as the Senate narrowly approved a budget blueprint allowing Democrats to push the legislation through Congress in coming weeks with or without Republican support.

At the end of about 15 hours of debate and back-to-back votes on dozens of amendments, the Senate found itself in a 50-50 partisan deadlock over passage of the budget plan. That deadlock was broken by Vice-President Kamala Harris, whose “yes” vote provided the win for Democrats.

This was a “giant first step” toward passing the kind of comprehensive coronavirus aid bill that Biden has put at the top of his legislative agenda, Senate Majority Leader Chuck Schumer said.

Shortly before the final vote, Democrats flexed their muscle by offering an amendment reversing three earlier votes that Republicans won.

Those had used the coronavirus aid battle to voice support for the Canada-to-United States Keystone XL pipeline that Biden has blocked and support for hydraulic fracking to extract underground oil and natural gas.

With Democrat Harris presiding, she broke a 50-50 tie to overturn those Republican victories. It marked the first time Harris, in her role as president of the Senate, cast a tie-breaking vote after being sworn in as Biden’s vice-president on Jan. 20.

Before finishing its work, the Senate approved a series of amendments to the budget outline, which had already passed the House of Representatives on Wednesday. As a result, the House must now vote again to accept the Senate’s changes, which could occur as early as Friday.

For example, the Senate added a measure calling for increased funding for rural hospitals whose resources are strained by the pandemic.

But as the hours wore on and dozens of amendments were offered, exhausted senators mainly spent the night disposing of Republican ideas, such as ending all U.S. foreign aid and prohibiting Congress from expanding the U.S. Supreme Court beyond its current nine justices.

Coronavirus deaths in the United States surpassed 450,000 on Thursday, and daily deaths remain stubbornly high at more than 3,000 a day, despite falling infections and as the country races to vaccinate more people.

Infectious disease specialists expect deaths to start dropping soon, after new cases hit a peak right around the beginning of the year. New COVID-19 deaths could ebb as early as next week, said the new director of the Centers for Disease Control and Prevention.

But there’s also the risk that improving trends in infections and hospitalizations could be offset by people relaxing and coming together — including this Sunday, to watch football, she added.

“I’m worried about Super Bowl Sunday, quite honestly,” Dr. Rochelle Walensky said Thursday in an interview with The Associated Press.

Public health experts are watching Florida closely this week, because the Super Bowl will be played in Tampa. City leaders and the NFL are trying to physical social distancing by capping attendance at a third of the stadium’s capacity — 22,000 people.

– From Reuters and The Associated Press, last updated at 7 a.m. ET

In British Columbia, health officials announced Thursday it is now mandatory for students in middle and secondary schools to wear non-medical masks in all indoor areas of the school.

The B.C. Ministry of Education said masks can come off while students are at their workstation in the classroom, while a barrier — like a sheet of Plexiglas — is in place or while they’re eating and drinking. 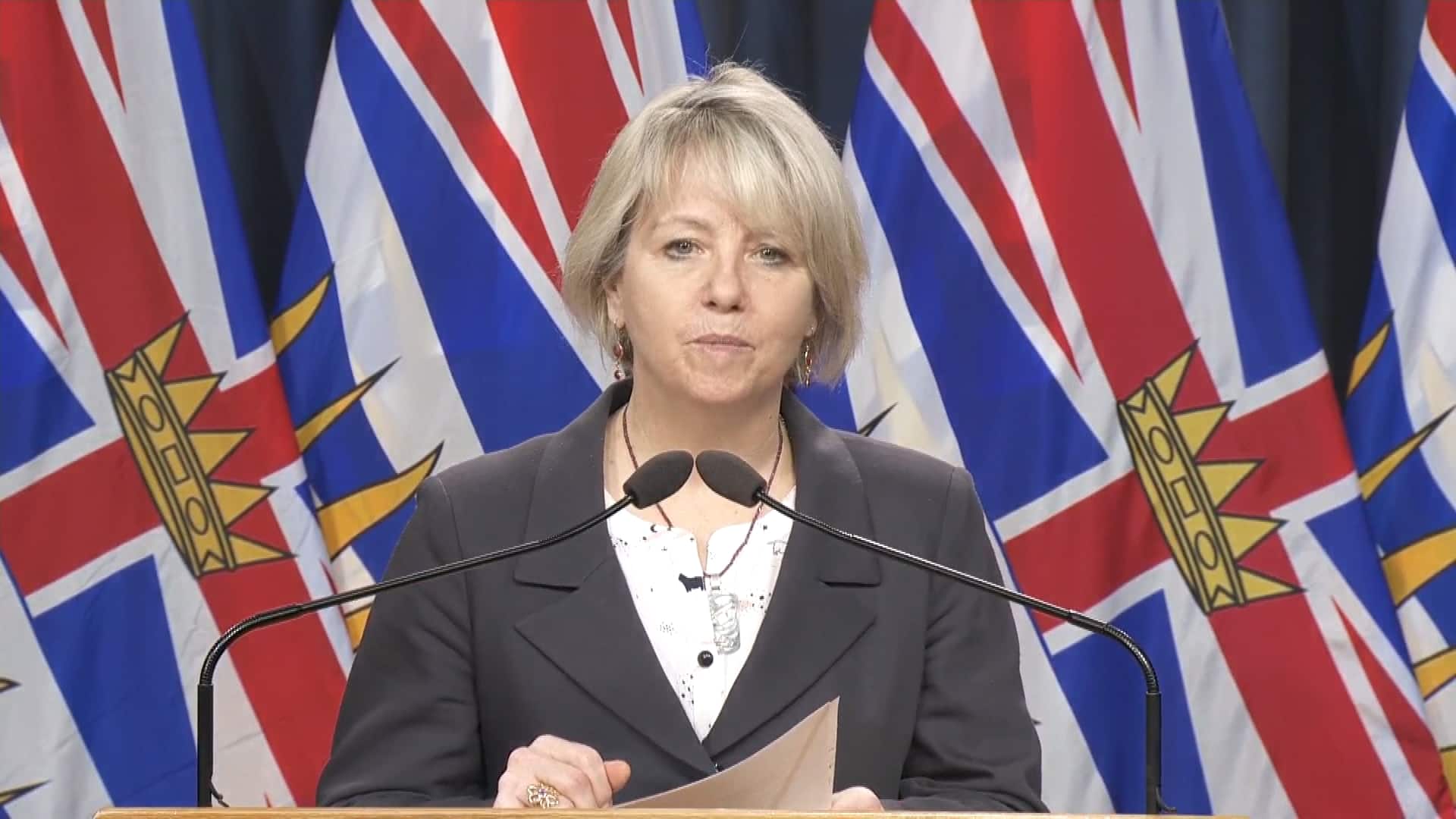 B.C.’s provincial health officer says transmission generally doesn’t happen when staff and students are sitting at their desks, and that it can be challenging for younger students to wear masks all day. 1:23

While staff at elementary schools are included in the new mandatory mask rule, masks remain optional for elementary students.

The province also announced the creation of six regional rapid response teams — one in each health authority — to support independent schools across the province.

The teams, created with $900,000 in funding, will conduct physical and virtual inspections to ensure health and safety guidelines are being followed consistently.

Meanwhile, Ontario says it’s considering calling off March Break in an effort to reduce the spread of COVID-19, a move educators and some parents say could lead to mass burnout.

On Wednesday, Lecce announced that students in regions hit hard by COVID-19 will begin returning to physical classrooms next week in the face of gradually declining new infections and additional safety measures put in place for schools.

Here’s a look at what’s happening across the country:

– From CBC News and The Canadian Press, last updated at 7 a.m. ET

What’s happening around the world

As of early Friday morning, more than 104.9 million cases of COVID-19 had been reported worldwide, with more than 58.3 million of those considered recovered or resolved, according to a tracking tool maintained by Johns Hopkins University. The global death toll stood at more than 2.2 million.

In the Americas, Mexican President Andres Manuel Lopez Obrador posted a video Thursday saying he had tested negative on an antigen test, after testing positive for COVID-19 about 12 days ago. “I am well now,” Lopez Obrador said, walking down a flight of stairs in the National Palace to prove his point.

The country posted a near-record daily COVID-19 death toll of 1,682 Thursday, bringing the total to 162,922. Authorities also announced that about five cases of the variant first reported in the U.K. had been found in Mexico, some apparently through local transmission.

In Africa, Burundi has become at least the second African country to say it doesn’t need COVID-19 vaccines, even as doses finally begin to arrive on the continent that’s seeing a deadly resurgence in cases.

The health minister of the East African nation, Thaddee Ndikumana, told reporters on Thursday evening that prevention is more important, and “since more than 95 per cent of patients are recovering, we estimate that the vaccines are not yet necessary.”

The minister spoke while announcing new measures against the pandemic. The country closed its land and water borders last month. It now has well over 1,600 confirmed coronavirus cases.

Neighbouring Tanzania this week said it had no plans to accept COVID-19 vaccines after President John Magufuli expressed doubt about them, without giving evidence. He insists the country has long defeated the virus with God’s help but faces growing pushback from fellow citizens, and officials with the Africa Centers for Disease Control and Prevention and the World Health Organization have urged Tanzania to co-operate.

In the Middle East, Israel plans to begin slowly easing its latest coronavirus lockdown on Sunday, hoping that its rapid vaccination campaign helps to contain an outbreak accelerated by new variants.

A government statement released early Friday details the lifting of restrictions. People will no longer have to remain within 1,000 metres of home, national parks will reopen, and restaurants can offer takeout. Workplaces not open to the public can also reopen.

In the Asia-Pacific region, all 507 Australian Open players and staff who stayed at a quarantine hotel where a worker contracted COVID-19 have tested negative and been cleared to participate in the Grand Slam, tournament director Craig Tiley said on Friday.

Health officials said on Wednesday that a worker at the Grand Hyatt hotel had contracted the virus, prompting the testing and quarantining of 160 players, as well as coaches and Australian Open officials. Warm-up matches at Melbourne Park were called off on Thursday but resumed on Friday.

In Europe, Germany’s health minister says first batches of the newly authorized Oxford-AstraZeneca vaccine for will be delivered to the country’s 16 states Friday.

Jens Spahn said the addition of a third vaccine would “make a real difference” to Germany’s immunization campaign, which has so far been sluggish compared to the United States or Britain. But Spahn said that, for now, the AstraZeneca shot will only be given to people aged 18-64, due to lack of data on older age groups.

British officials say everyone arriving in the country from coronavirus hot spots will have to spend 10 days in hotel quarantine starting Feb. 15 in a bid to stop new variants of the virus reaching the U.K.

Arrivals from high-risk countries will have to quarantine in approved hotels patrolled by security guards and will be billed for their stay. The government is facing criticism for the delay in implementing the policy, which it first announced in late January.

– From The Associated Press and Reuters, last updated at 7 a.m. ET

Vaccination for All Adults Only Solution, Not Lockdown, Says Delhi Minister Manish Sisodia